Here in Los Angeles, sometimes it seems like you can't go 3 feet without running into a trendy lunch truck. You can't go 5 feet without one of those trucks selling some kind of fusion taco (like Kogi and Calbi and Bool). I initially had mixed feelings about this, in a city chock-full of awesome regular taco stands (which I partly love because they feed my very severe horchata addiction), but recently I've come around.

Given the profusion of Korean fusion tacos we, as a city, have been experiencing, its no surprise that when I saw Bool Kogi Sesame Marinated Boneless Beef Ribs (no, I'm not a paid advertisement), the first thing that popped into my head was tacos. 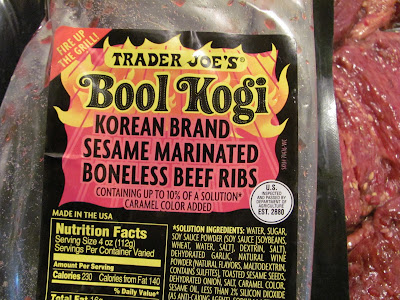 A delicious component of these tacos is some kind of vinegary slaw... to make mine, I used Trader Joes (of course) shredded broccoli slaw and some very thinly sliced red onions. I marinated these in seasoned rice vinegar and a tsp or so of sesame oil. (as a side note... my favorite cucumber salad is just thin sliced English cucumbers and rice vinegar- so refreshing!). 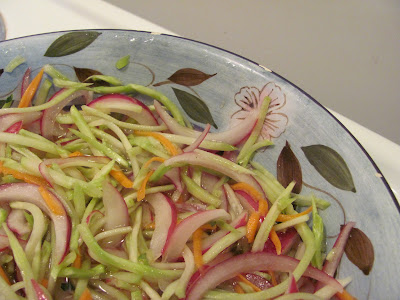 I was not in a tortilla kind of mood, so to continue with the fusion theme, decided to use the Trader Joes (you're getting the theme now, yes?) Middle Eastern flatbreads, which are soft and delicious. I lightly toasted them, but you don't have to. You can basically use any wrap-like material that you like. 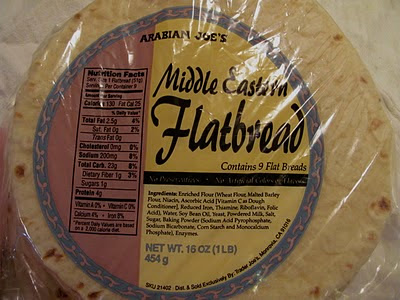 Now, at just about this point, I realized my grill is either out of gas or in some other way non-functional, which was a shame. I was in too deep to give up, so decided to steal my my Mother's method for cooking meatballs- basically, take a cooling rack, put it over a baking pan, and put the meat on that. I used the broiler, she uses the oven. It works well because the fat is able to drain out as it would on a grill (see exhibit A, below. I apologize to my vegetarian friends for the meat close-up): 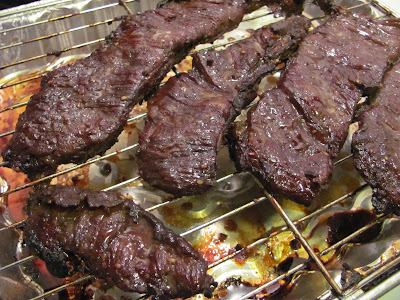 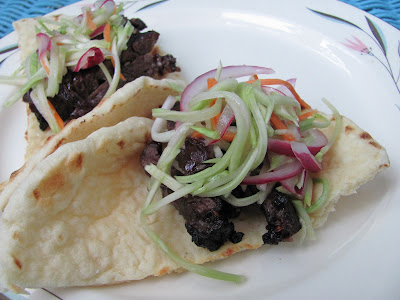 I served mine with corn (upcoming post) and the remainder of the slaw. I don't eat a lot of red meat, but when I do I like to eat it like this, in a scenario where there can be minimal meat in the context of a lot of veggies. This was really good! I don't know that it'll put the taco trucks out of business, but it would definitely be an interesting twist to throw at your next BBQ!
Posted by yellowfish at 8:56 PM

Thanks for this post! I'm always wanting tips on using TJ's goodies, and this one is a keeper.

We had this for dinner tonight. Fantastic! We also made the broccoli slaw with red onion, seasoned rice vinegar, and sesame oil. So quick and easy. Thanks for sharing!