Ok, I am SO excited about this.

I recently heard about how its possible to actually make your own vanilla extract. I immediately decided that my Christmas gifts were going to be very heavy on extract. So, I searched the internets far and wide, and found a number of sources of vanilla beans (they are so much cheaper than at the grocery store its actually ridiculous).

I got mine at Beanilla. I picked out Bourbon vanilla beans (instead of Tahitian, or Mexican, or Madagascar or the other choices). Mainly, I picked it because I don't know much about it and the sites I read said that that would give the most traditional vanilla flavor. I got half a pound. This is because I didn't want to be short, and I wanted to make a lot of extract, and I didn't really know how much vanilla beans weigh. Trust me on this on - NO ONE needs half a pound of vanilla beans. NO ONE.

So, today I got this in the mail (see how that is a crap-ton of vanilla beans?) 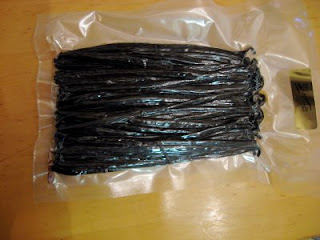 Then I, needed something to put them in. Based on the advice of the person who got me started on this, I used cognac (this would be more rewarding for someone who likes cognac, because I had maybe 1 drink worth of it left after I made room for the beans, and there was no way I could stomach that stuff). You can use vodka too. Since I realized I had a lifetime supply of vanilla beans, I spontaneously expanded my Christmas list, and bought 2 bottles. I will now be the proud owner of 6 cups of extract. I might need to kill the jewelry store and start a bake shop!

Then, based on this website I cut up the beans length wise, and scraped out the "caviar". You can't imagine how good this smelled. The site I read recommended a minimum of .8oz beans/cup alcohol (thats the FDA requirement for an extract), but said more was better. I did a little bit more than that. 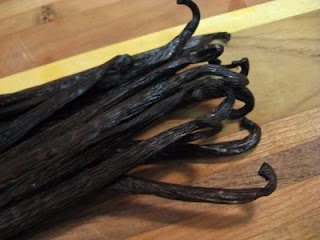 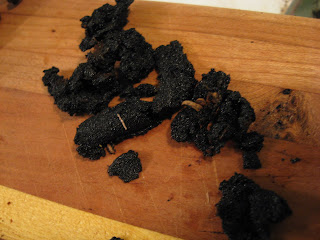 I cut them in half the other direction, and stuck them in the bottle. Now I have to shake it every day for a week, then periodically turn it. In a few months (like, by Christmas), I will have delicious vanilla (or at least I seriously hope so) 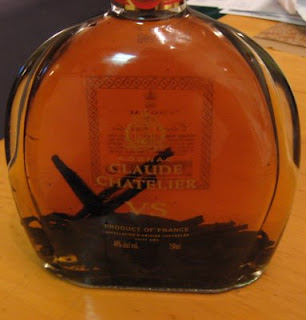 By the way. If anyone knows what to do with a large amount of left over vanilla beans, by all means please speak up.
Posted by yellowfish at 10:17 PM

I'm loving this idea. I can just smell it now. mmmmm

I've wanted to do this for a long time. I'm so excited to see the results!!